Ringing bells is a complex but very enjoyable art; there is a practice session every Tuesday evening.

The bells are rung for the 10.30am service every Sunday morning and other special services during the year.

To find out more about becoming a bell-ringer, please contact, our Ringing Master or Secretary.

The central tower is supported on four massive pillars which are typically Early English (13th Century) and the oldest part of the church. Looking up from the tower crossing between the Nave and Chancel, one can see the arches supporting the ringing chamber floor and the painted boss which covers the trap door through which the bells were lifted up into the tower.

The ringing chamber is where the bells are rung and the eight ropes, with their coloured sallies, hang through holes in the ceiling, arranged roughly in a circle. The rope for the Sanctus bell, which is chimed from the ground floor 29 feet (9 metres) below, passes through the chamber. The ringing bells were also originally rung from the ground floor but in 1787 the ringing chamber was moved up to its existing level, to make the bells much easier to ring.

The east wall of the ringing chamber is taken up by the clock which is reputed to keep "Wantage Time" independent of Greenwich Mean Time or British Summer Time! The clock bears a brass plate showing that it was erected by public subscription to record 60 years of Queen Victoria's reign and it was set in motion on 20th August, 1898. It used to be driven by weights on wires which ran over pulleys at the top of the tower and which were raised by hand winding daily. During a day, the weights descended over 25 feet (about 8 metres). The clock is now driven by much smaller weights which are automatically wound electrically many times a day.

The wires which cross the ceiling actuate external hammers on the bells to strike quarters and hours - Westminster chimes and a hymn tune. The mechanism at the left side of the clock case - like a giant Swiss music box movement - plays three verses of the hymn tune "Angels’ Song" by Orlando Gibbons, at 3, 6, 9 and 12 o'clock throughout the day and night.

On the ringing chamber walls are hung records of ringing achievements such as peals (5,000 changes or more), striking competition certificates and photographs of ringers. A particularly interesting item is a John Betjeman poem `Wantage Bells", written in his own hand and composed for the marriage of his daughter Candida for which the bells were rung.

Also hanging up in the ringing chamber are method charts which are the equivalent of the choristers’ music. The lines on these charts are the lines which individual bells must follow in ringing changes. But, unlike the choristers, the ringers do not use these charts while ringing, the methods must be memorised - the charts are only an aide mémoire before ringing. It takes many years of practice to be able to ring all the methods on the charts.

The ladder against the wall opposite the ringing chamber door gives access to the bells and the tower top through a trap door. Once past the trap door, the stairs are relatively easy to climb but because the climb through the trap door is a little awkward, you are advised to leave non-essential items in the ringing chamber to ensure you have both hands free to grasp handrails.

There are nine bells in the bell chamber or belfry. Eight of them (a full octave) are hung for full wheel ringing and the ninth is a Sanctus bell which is chimed during services. The Sanctus bell is the oldest of the nine, having been cast in 1609; the oldest ringing bell is the third, cast in 1669. The rest of the octave were cast between 1764 and 1892, the latter date being the date when the old six were augmented to eight and rehung in a new oak frame. The frame has remained although the bell fittings such as the headstocks on which the bells are supported and the bearings were all renewed in 1938.

The bells are made of a special bronze, known as "bell metal" which is about 75% copper and 25% tin. Click here to see a diagram of the layout of the bells together with their weight and year of casting. The total weight of the ringing bells is just over 4 tons 7 hundredweight (cwt) or 4450 kilograms (4.45 tonnes). The largest (tenor) bell weighs just over 22 cwt or 1100 kg and has a diameter at its mouth of 50 inches (1270 millimetres).

The Wantage Churchwardens' accounts show that there have been bells in the tower for at least 400 years, although in the sixteenth century there would probably have been no more than four bells. In 1575 a William Jackson was paid 7 shillings (35p) for mending the Great Bell and a William Warnar 6 shillings (30p) for mending the Second Bell. A payment for "a day's work among ye bells" in 1574 was 20 shillings (£1.00).

The landing above the bells allows access to the four clock faces, one of which, that facing the Square, is lit. Note the very old beams supporting the landing.

Access to the tower top is through a small door which leads out to the walkway behind the parapet which is about 61 feet (18.5 metres) above the church floor. The door is in the north side of the tower and from this side you look down onto the old vicarage and the former library immediately below the church, Mill Street, Limborough Road and the new Sainsburys’ beyond and, in the distance, Grove. On the horizon to the right of the silo at Elm Farm is Oxford.

To the south are some prominent buildings of the town such as King Alfred's School, the Leisure Centre, St Mary's School and the Civic Hall. Chain Hill is to the south- east of the town and the Berkshire Downs form the horizon.

To the east is the Market Place with the statue of King Alfred and, in the distance, Didcot Power Station.

Views to the west are restricted by high ground but the Convent is prominent and, in the distance, White Horse Hill can be seen to the southwest and Faringdon Folly to the north-west. 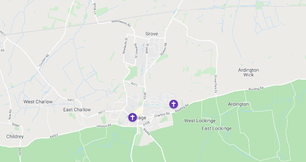 The Parish of Wantage with Holy Trinity, Charlton